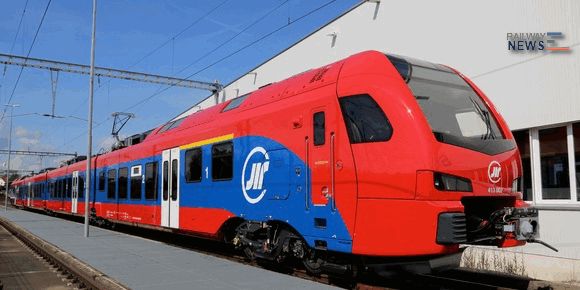 The FLIRT3 is Stadlerâs newest train. Serbiaâs national railway company, Å½eleznice Srbije (Å½S), and Stadler Rail gave industry professionals and the public an exclusive first look at this new vehicle at the InnoTrans trade fair. In March 2013, Å½S ordered 21 electric four-carriage FLIRTs (Fast Light Innovative Regional Trains) from Stadler Rail for use on busy suburban and regional routes. The order is being financed by the European Bank for Reconstruction and Development (EBRD) in London.

Based on the FLIRT, which has sold over 1â000 units over the last 12 years, Stadler has developed the next generation, FLIRT3. This range of state-of-the-art trains is made up of various modular sub-ranges. Peter Jenelten, Executive Vice President Marketing & Sales at Stadler Rail, is very pleased about the brand-new train: âWe are proud that our FLIRT3 trains will allow Å½S to set new standards in regional transport, and that FLIRT trains will be in operation in South-Eastern Europe for the first time. I would like to thank the whole team, who made it possible to deliver a train that conforms to TSI just 18 months after receiving the order from the customer.â

Tailored to customer requirements
Each of the four carriage bodies has one passenger door per side to meet the requirements of Serbian Railways. This highlights one of the real strengths of the FLIRT3 concept: the number of doors and various other features can be adapted variably to meet the customerâs requirements.

The trains have an electric drive for a voltage of 25 kV, 50 Hz. The maximum speed of the modern trains is 160 km/h, and they can be used in multiple-operation of three trains. All cars of the train can all be accessed without steps, as on all FLIRT trains, and have 235 seats, including 11 tip-up seats and 12 seats in first class. They incorporate spacious multifunctional compartments in the entrance area for wheelchairs, prams and bicycles, as well as a wheelchair-accessible toilet. The passenger compartment and driverâs cab are air-conditioned. Emergency intercoms allow passengers to contact the driver.

Low energy consumption
The vehicles will initially have a local Indusi train control system, with a possibility for subsequent upgrade to the European ETCS 2 standard also included at the planning stage. The Å½S multiple-unit trains are, as all Stadler FLIRTs, made from lightweight aluminium and are therefore low in weight. This means they can accelerate faster, thus significantly reducing energy consumption and operating costs in comparison to conventional vehicles. This advantage is compounded by energy recovery, where braking energy is fed back into the overhead line. The contract between Å½S and Stadler is worth around EUR 100 million. Delivery of the trains will take place in two-week intervals until summer next year.